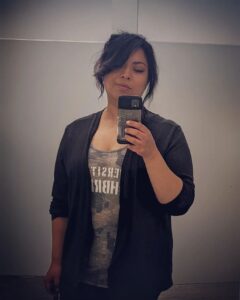 Oki, my name is Kristy Eagle Bear, and I am from the Blood Reserve where I was raised by my maternal Grandparents. Although I was exposed to the culture and language throughout my life, I didn’t grow up with a strong connection or appreciation for it when I was younger and am only now reconnecting as an adult through academia.  As for the language, I know some basic words that you learn in elementary to high school, but unfortunately haven’t used it much in my adult life. Being inspired to return to school by my mom, I am now graduating from the University of Lethbridge with my degree in Psychology and a minor in Anthropology; and I was able to learn how to critically analyze Indigenous issues with an interdisciplinary approach within this institution. Thanks to the many wonderful instructors that I’ve had the opportunity to take classes with—like Steve Ferzacca who introduced me to the concept of decolonization—while at the University, I was able to work on deconstructing my own colonial mentality and learned to appreciate my own culture’s history & language like never before.

Back in 2018, I took Inge’s Blackfoot Structure class and found the material really helped me understand the Blackfoot language in a new way and I really appreciate the time and effort she is putting into this language revitalization project. After taking several classes with Paul Mackenzie-Jones (Indigenous Studies), the idea of decolonization was put into a new perspective with classes like Indigenous pop culture and Indigenous cinema—where language is often used as a way of decolonizing the way we look at the media’s depiction of Indigenous people throughout history. He also teaches two Indigenous Resistance classes, where I was able to learn about colonial history from an Indigenous perspective and the various ways Indigenous people have continuously resisted cultural genocide by preserving their languages and stories. Language revitalization is definitely an act of resistance, and I’m glad to be apart of it.