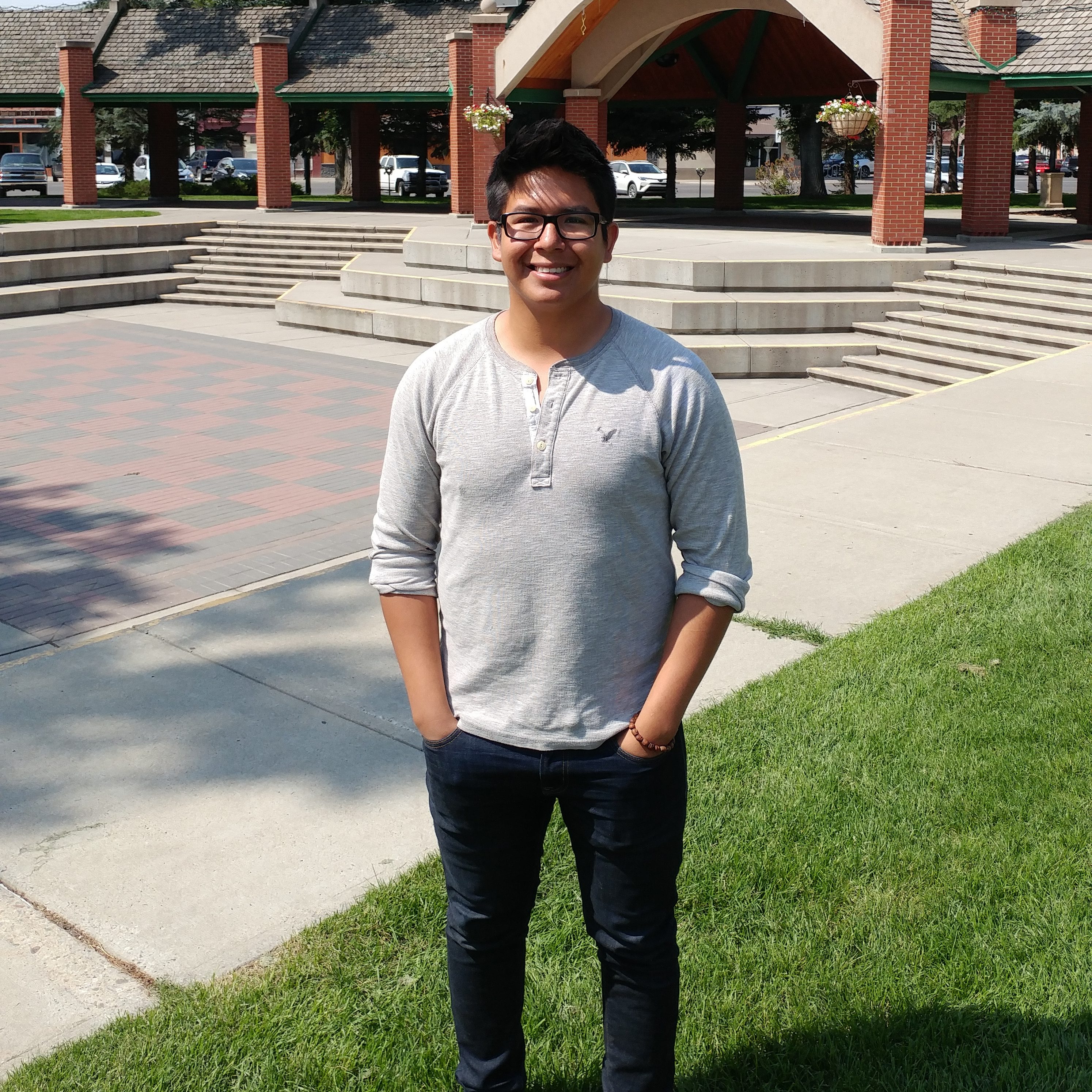 Hi everyone, my name is Blaise Russell and I am from the Blood Tribe reserve. To tell you a little bit about my upbringing, I grew up on the reserve ever since I was a child and went to school on reserve. During my adolescence, I was inspired by family members such as my mother (Caroline) and my grandmother (Sylvia) who raised me with our Blackfoot language and culture, both of which have shaped my identity as a Blackfoot man today. Another family member who then inspired me to think critically and taught me the significance about our Blackfoot Paradigm (in Blackfoot Niitsitapiisini ‘Our Way of Life’) was named Taatsikiistamik (Narcisse Blood).

When I graduated from Kainai High School, I was unsure of what type of career or field I wanted to pursue. At the time, I was interested in languages, cultures, and societies from around the world. I remember the time when my family traveled to Oahu, Hawaii, when it was hosting the American Indian Higher Education Consortium (AIHEC) conference. It was there that I saw many different kinds of Indigenous nations from across the globe, including the Blood Tribe, who presented their education programs that were centered in traditional Indigenous methodologies. During that time, Narcisse presented a program that was called “Kainai Studies,” which was a program that was Blackfoot oriented and based on tradition, science, philosophy, etc. While in Oahu, I also began to do some fieldwork by visiting with these other members from different nations to discuss their culture and language and to see what approaches they were taking to reclaim their own Indigenous paradigms. From that very moment, I had found my calling.

I am currently a third-year student majoring in anthropology at the University of Lethbridge. What I love about anthropology is how it investigates the complexities of human societies, cultures, and their developments. I have applied my studies in anthropology to understand what the challenges are for First Nations communities/territories and how there might be conflicts in their paradigms. During the winter semester of 2017, I took an anthropology class that studied culture, language and communication. In this course we talked about how language is characterized ‘through the meaning of words’ in different cultures. I also took another class on the structure of the Blackfoot Language and this is when I began to see the cultural attachments in our language. As the semester was about to wrap up with finals and presentations, I met Dr. Inge Genee who was a guest speaker in one of my courses who presented a project of hers called “The Blackfoot Digital Dictionary.” What I found intriguing about this project was its approach to ensure the safety and survival of the Blackfoot language through a dictionary and other resources that would be available online. What I now deeply admire about the Blackfoot Digital Dictionary project is how it acknowledges the valuable information that language encodes in culture. I am proud to be a part of this form of language protection, acquisition, and repatriation.

During the summer of 2017, I worked as a summer student who processed audio files, transcribed Blackfoot words and recordings, added pictures to certain themes, and worked to add more to the Blackfoot Traditional values theme. In addition to these tasks, my main focus was researching more about words for Two-Spiritedness in Blackfoot (for example, the word ááwowáakii whose meaning has now changed in Blackfoot culture).

I want to extend my warm gratitude and sincerity to Dr. Inge Genee and to the other summer students that I worked with: Myles Shirakawa, Mahaliah Peddle, and Blackfoot student Rachel Hoof. I am honoured to work closely with you all and thank you all for your sincere interest and respect while working with our culture and language. I have not only learned that our language is an important part of our Blackfoot paradigm, but it as well contributes significantly to making us who we are as Nitsitaapiiksi. Thus, if our elders can repatriate our sacred items, which reflect our holistic purpose as Blackfoot people, then I believe we can repatriate our language no matter how old you are or how unskilled your pronunciation is; there is resilience in our blood and spirit that we carry on from our ancestors. Mookakiit Iikaakimaat — Try hard.